Tough Slog on the Marathon 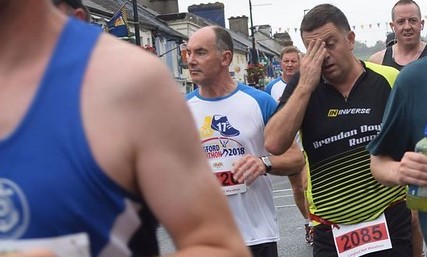 It has certainly been a tough couple of weeks, hasn’t it?

The gun-violence prevention news has been uniformly rotten so far this month, and I almost hate to think of what the rest of the month will bring.

I posted a couple of months ago about the Activism Marathon, and the fact that things never happen fast enough when you’re working for social change — in our case, gun-violence prevention.

Tough stretch on the marathon

This month has felt like a grim stretch of the marathon. How grim?

It’s pretty grim when the most heartening thing in recent news is the police chief of Houston calling out his home state’s two senators and the Senate majority leader for not wanting to “piss off the NRA.”

“The NRA doesn’t like the fact that we want to take firearms out of the hands of boyfriends that abuse their girlfriends,” said Art Acevedo. “And who killed our sergeant? A boyfriend abusing his girlfriend.”

Damned grim. But at least somebody out there has our voice. It’s not much of an upside — I sure wouldn’t call it a silver lining — but it’s like hearing a tiny “You can do it!” from the crowd as you run that marathon.

A glimmer from the corporate front

And there’s news from America’s businesses. I mentioned in September that the nation’s two largest retailers, Kroger and Walmart, had joined the growing list of companies asking shoppers not to openly carry guns in any of their stores. In some parts of the U.S., that’s a no-brainer. But in many other parts, it can get a well-meaning company into trouble with its customers. And into a huge quagmire with folks on social media.

So I’m a wee bit encouraged to learn that more companies are taking measurable steps to keep their workers, customers and communities safe from gun violence. I’m glad to learn that Guns Down America is making it easy for us to keep track of those companies and applaud their efforts with this honor roll: 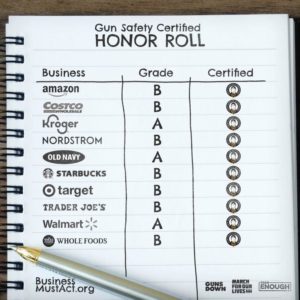 Nineteen other companies rated less than a “B”, but these ten have been granted the “Gun Safety-Certified” badge, designed by Parkland father and artist Manuel Oliver and Stop Handgun Violence. The badge features an image of Manny’s son, Joaquin, who was a victim of the Parkland mass shooting.

And then there’s the news that Dick’s Sporting Goods reported an uptick in earnings, at least partially attributed to the retailer’s decisions to stop selling guns to customers below the age of 21. Dick’s also removed the hunting category, including guns, from more than 100 stores and scrapped $5 million in assault rifles that were still in stock. The company acted and its shareholders rewarded it.

It’s like another tiny cheer from the crowd, isn’t it?

And, we remember those who died at Sandy Hook

The brutality of four headline-grabbing shootings in one week is not lost on those of us trying to prevent gun violence. Especially not when vigils are taking place in 90 cities across the country to commemorate the shooting at Sandy Hook Elementary seven years ago.

On the one hand, it’s completely pathetic that we haven’t yet ended the kind of gun violence that killed 20 youngsters and six staff members. We’ve made plenty of progress on laws that aim to keep firearms out of the hands of people who shouldn’t have them. But we really have to admit to those 26 souls that nope, sorry, the senselessness continues in spite of our efforts.

On the other hand, there’s something about the annual Sandy Hook vigils that keeps us going. They are a reminder that, as grim as things are and as never-ending as the marathon feels, we’re doing all of this work for real people. Focusing every year on the deaths we couldn’t avoid in the past helps us focus on the deaths we can avoid in the future.

Even in a week as awful as the last few have been, we manage to hang on.

Jill Marr is a life-long resident of San Diego, a graduate of SDSU and the local Communications Lead for SD4GVP and Moms Demand Action.