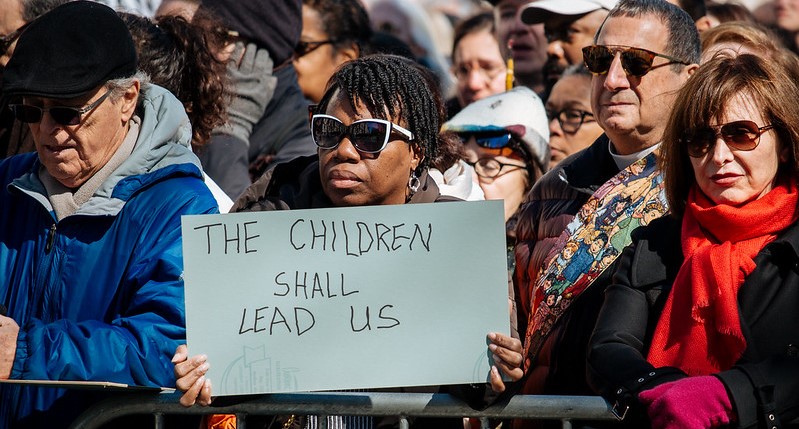 At a recent fundraising event for SD4GVP, Wendy Wheatcroft, one of the coalition’s founders, offered her perspective on leadership.

It is surreal to stand up here and witness our success. It is humbling to continue to be a part of it. It is hard to find words that I have not said a million times before, but I will try.

Like many of you, I have survived gun violence. Four times. Oddly, though, I never realized I was a gun-violence survivor until I started doing this work. Most people do not realize they are survivors because gun violence has been so normalized. And it does feel like a million years have passed since I jumped onto this journey with all of you. If someone had told me about us and all of this five years ago, I wouldn’t have believed you. I was supposed to retire someday as a teacher, but this goes to show how there are plans for us that we can’t even imagine.

Instead of sharing the usual sad vignettes and statistics, I thought that I would speak today about leadership. I always knew I could lead and wrangle a roomful of children, but I never envisioned myself leading adults. However, I am fortunate that I have never had to lead alone. Often I receive credit — and also the blame — for things that I do not do, like shutting down the Del Mar gun show or spray-painting a prominent Republican’s house. Both are things I did NOT do. My name has become associated, truly or falsely, with acts of gun-violence prevention. But we all know that one person alone could not do everything we do. All of us are leaders.

Putting down our armor

We can be armored leaders or unarmored. Brené Brown asks, “How do we put down the armor, and how do we inspire our teams to do the same?” The idea of putting down our armor to do this work is both symbolic and ironic. We are leading people into battle against an insanely armored, and armed, contingent.

I have seen each of you come into your first meeting, shy and quiet, as I too did at one time. And I have seen you become vulnerable, put yourself out there and share your gifts to contribute to this cause and to our coalition. I could go through each person in this room and find a poignant example of you laying down your armor. 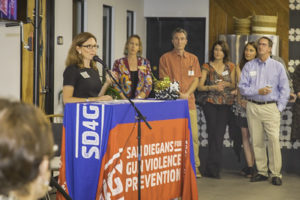 We practice gratitude and we celebrate milestones and victories. We also mourn quite often. In laughing and crying together, we have created a bond that is difficult to understand from the outside. Through this work, we have found a bonus family.

We have created an alternative to numbing ourselves. In the past few years, without this group as an outlet for the pain and strife, we could have numbed ourselves through unhealthy means or, worse yet, become complacent and checked out. Instead, the majority of us have checked in. We show up and we work hard. I don’t know about you, but this work has kept me sane in very insane times. When we show up, we show up for one another.

We operate from a place of integration, not fear.

People sometimes assume that we do this because we are afraid of guns. That couldn’t be further from the truth. We are grounded in confidence, information and facts that prove we are on the right side of this issue — the side that responsible gun owners are starting to embrace with us. WITH US. We remain vulnerable and open, but strong and courageous. We are not afraid.

It would be very easy for us to become negative and cynical, and lose hope. This issue breaks our hearts every single day. We know the solutions, and it can be frustrating to get there, but together, we know how to keep pushing toward our common goal: to end gun violence.

Theodore Roosevelt said we can credit the person “whose face is marred by dust and sweat and blood; who strives valiantly; who errs, who comes up short again and again, who at the best knows in the end the triumph of high achievement, and who at the worst, if she fails, at least fails while daring greatly.” The credit goes to those in the arena, all of us.

When you have done something that no one else has done before, like build a coalition to prevent gun violence, the value is hard to quantify. Moms Demand Action likens it to building the plane as you are flying it.

So let’s keep building that plane. I know that together, someday, we will get to land it.

Wendy Wheatcroft is a mom of three, an educator and a gun-violence prevention advocate working to end gun violence in all of its forms.