Second Amendment gun groups have been getting ink and airtime in local media lately. They’ve been claiming that recent mass shooting statistics in California somehow prove that sensible gun laws don’t work. Their message is that, despite having some of the strictest gun laws in the country, California is still disproportionately plagued by mass shootings. “Why bother passing gun laws in the first place?” the groups ask.

“Because they work,” is our answer.

It’s true that the state has not been immune to the scourge of mass shootings. But because California ranks first in population (more than 39 million people), looking only at the absolute numbers in mass shooting statistics is misleading.

First, California ranks 44th in the country in gun deaths (as of 2017), and we believe that its strict laws have a lot to do with that. Compare California, at 7.9 deaths per 100,000 inhabitants, with Alaska, at 24.5 deaths per 100,000. Alaska is a shall-issue, constitutional carry state. In Alaska there are no firearms registrations, no permit is required to purchase firearms and no background check is needed to buy a handgun from a private individual. Open carry is legal in Alaska for anyone who is legally allowed to possess a firearm. Gun ownership is estimated at 67 percent in Alaska and 20 percent in California. The states are at opposite ends of the spectrum in most respects.

What’s more, many of California’s significant gun laws, including the assault weapons ban, were enacted during a push for gun safety in the early 1990s that grew out of the Stockton schoolyard shooting in 1989. It takes several years to implement laws and for the population to experience their benefit. 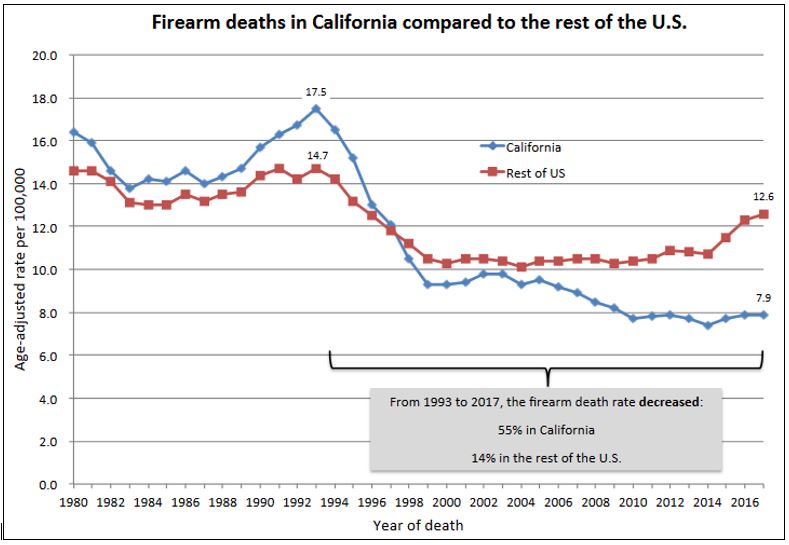 Firearm deaths in California compared to the rest of the U.S. (Data from Centers for Disease Control and Prevention, the National Center for Health Statistics and CDC WONDER databases, as of 2017.)

The effect on California’s families

We also want to point out that, while gun safety laws have not completely done away with gun violence in California, they have made a world of difference for many families.

To put all that into perspective, if California had the same gun death rate as the rest of the country, the state could have counted 14,000 more victims of gunshot wounds from 2007 to 2017 alone. On the flip side, if the national gun death rate was as low as California’s over this same period, nearly 100,000 Americans who died from gun violence across the country might still be alive.

Gun safety laws work. The statistics tell the full story. That is why SD4GVP and other gun violence prevention groups around the state will continue to push for laws aimed at protecting the people of California.

Jill Marr is a life-long resident of San Diego, a graduate of SDSU and the local Communications Lead for SD4GVP and Moms Demand Action.