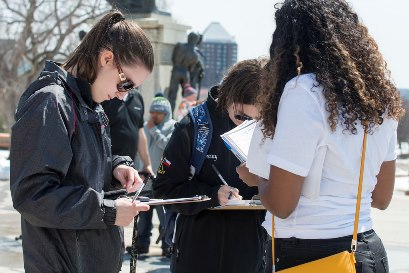 An online survey was administered in April 2022 among college students to gauge familiarity with laws, initiatives, and organizations around firearms and gun violence prevention.

Findings from the SD4GVP Spring 2022 College Survey Project showed that 60% of respondents have been exposed to violence involving a firearm or know someone who has. Most respondents (55%) stated that they don’t believe there are enough gun violence prevention talks or events on campus. When asked about feeling safe on campus, respondents were nearly equally split among feeling very safe (34%), somewhat safe (34%), or unsafe (32%).

College students who took the survey had mixed knowledge about initiatives or laws involving firearms. While a vast majority of respondents were familiar with background checks (87%), fewer knew about safe storage laws (34%), ghost guns (26%), or Gun Violence Restraining Orders (17%). Nearly 3 out of 4 respondents (74%) correctly stated that the US averages one mass shooting per day, yet 74% of respondents were unaware that 4.6 million American children live in a home with an unlocked and loaded firearm.

“We should educate [students] more on the topic.”

“Maybe teaching about gun violence in at least one class a student takes as a requirement.”

Other suggestions included more open communication and information on statistics about gun violence.

“[The university] could talk about gun violence prevention, express concern about the situation.”

“The biggest thing is to talk about it. Make it widely known and tell people to vote for change, [vote for] gun violence prevention laws.”

Knowing the organizations and getting active