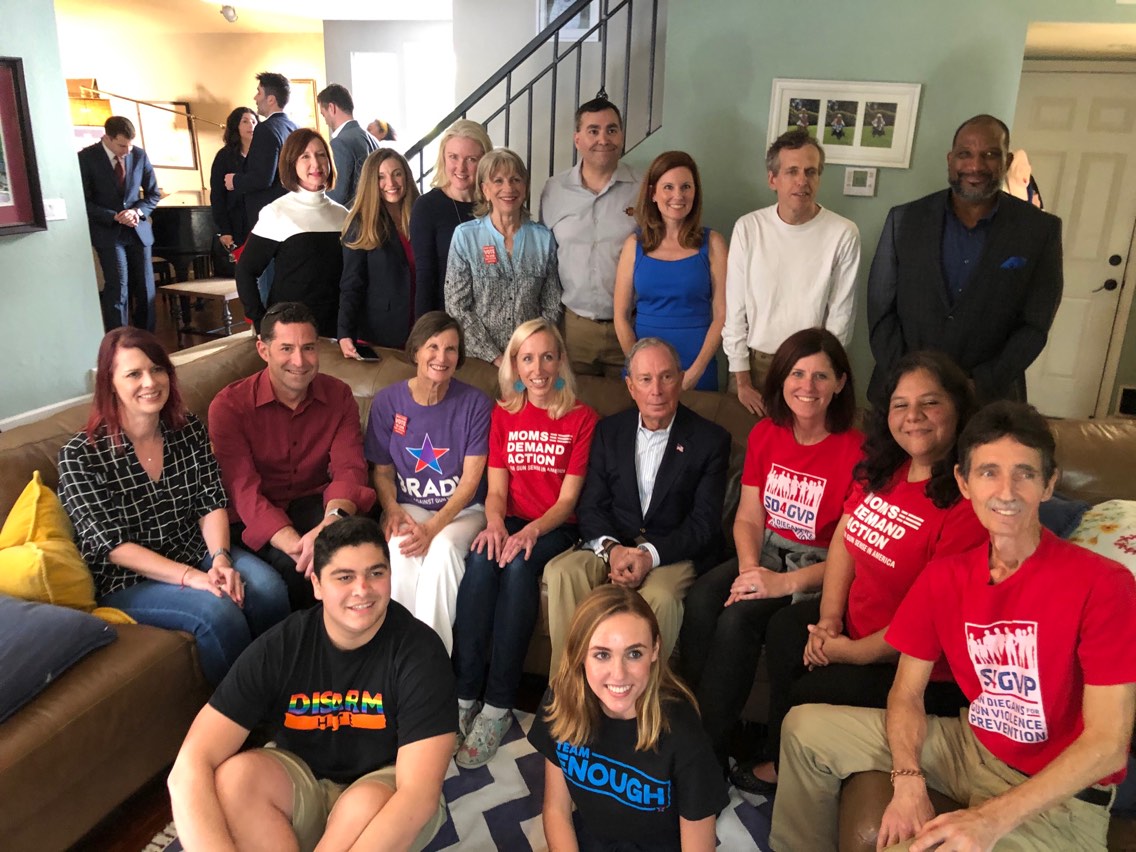 During his recent swing through Southern California, the Democratic presidential hopeful scheduled a campaign event at the home of Wendy Wheatcroft. Wendy is not only running her own campaign for San Diego City Council District 7, but she is co-founder of SD4GVP and state lead for Moms Demand Action. Michael Bloomberg co-founded Mayors Against Illegal Guns and later pledged $50 million of his own money to Everytown for Gun Safety, so for both candidates the overlap is compelling.

How many politically interested citizens can you fit in a back yard?

About a hundred, it turns out. And you still have enough room for camera crews from five local media organizations.

Speaking from a stage set up in Wendy’s back yard, Bloomberg stressed the need for sensible gun laws and talked about the work he did during his tenure as mayor of New York City. He’s pleased with the progress California has made in passing and enforcing laws that have kept the state low on the list of per-capita gun deaths.

It was a hurried afternoon of selfies, handshakes, hair-trigger timing and smiles for the camera (including the one with us, above). Bloomberg was unflappable, personable and on message through it all. You could say he did all the things that a typical presidential candidate does.

Except one: He didn’t ask anybody for money.

John White is a volunteer with San Diegans for Gun Violence Prevention.

Why We (Still) Work to End Gun Violence

What is it like in 2018 to work to end gun violence, to promote laws that keep firearms out of the hands of people who shouldn’t have them?

It is an exercise in threadbare hope swimming upstream against raw experience. Let me try to give you an idea.

First, you hope that the deadliest mass shooting in modern U.S. history will nudge the elected leader of the nation to think outside the box about gun violence. But after the October 1 massacre in Las Vegas leaves 59 dead and 441 wounded, President Trump says airily that the U.S. will “be talking about gun laws as time goes by.” When asked about a pending House bill that would loosen restrictions on purchasing gun silencers, he says that he will talk about that later.

“Later,” of course, comes and goes, bringing with it a mass shooting the following month in Sutherland Springs, Texas, that leaves 27 dead and 20 wounded. And you hope that two headline-grabbing mass shootings five weeks apart will move the needle into the red zone. But in a bit of distraction that would make any indulgent parent proud, the president says, “This isn’t a guns situation. We could go into it, but it’s a little bit soon to go into it.”

Next, seeing that your hope of action from the executive branch is misplaced, you turn to Congress looking for leadership and sensible legislation.

Republican Rep. Carlos Curbelo and Democratic Rep. Seth Moulton introduce legislation to ban the sale of bump stocks like the one used in Las Vegas, but it goes nowhere. Nine Republican senators ask the Bureau of Alcohol, Tobacco, Firearms and Explosives (ATF) to review its policy on bump stocks, with inconclusive results.

Meanwhile, there is a bill in the House of Representatives, H.R. 38, to allow concealed-carry permits from any state to be valid in any other state, effectively steamrolling over the concealed-carry laws that many states like California have worked hard to put in place. In a year with so many high-profile mass shootings, you tell yourself that clear-thinking legislators – even conservative ones – will probably not want to hazard a yes-vote on a gun bill, and you’re right: they don’t. So they artfully sweeten the concealed carry bill by combining it with bipartisan bill H.R. 4477 to tighten up the National Instant Criminal Background Check System, or NICS, so that people like the Sutherland Springs shooter can’t buy guns. You’re all for fixing NICS, but welding it to the gun lobby’s number-one priority doesn’t feel like sensible legislation, on balance. The combined bill passes the House 231-198, then goes to the Senate.

Glee ensues at the NRA, which applauds the House “for passing the most far-reaching expansion of self-defense rights in modern American history.” It calls the act “the culmination of a 30-year movement recognizing the right of all law-abiding Americans to defend themselves, and their loved ones, including when they cross state lines.” You find that a little hard to swallow.

“Probably take another 30 years for us to undo that,” you say.

Finally, you decide that it’s up to you, and you’ll have to go grass-roots.

In early December, small groups meet in living rooms and cafes around the country, planning rallies and vigils to commemorate the fifth anniversary of the deaths of 20 children and six educators at Sandy Hook Elementary School. Armed with felt-tip markers and sheets of poster board, they make signs, discuss logistics and plan carpools for micro-demonstrations on street corners. They don’t understand why so little has changed in five years.

“I wonder if the gun lobby has to arrange potlucks and make signs,” you think.

Most days it’s easier to find ammunition than it is to find hope.

Still, you persist with others in the belief that you can help end gun violence. One background check at a time. One safely stored firearm at a time. One parent asking another, “Is there an unlocked gun where my child plays?” at a time.

Hope is slim, and most of what you do feels futile.

John White is a volunteer with San Diegans for Gun Violence Prevention.